Within the first few weeks after the Alaska Permanent Fund Dividend (PFD) is paid, substance-abuse incidents increase, while property crime decreases. On an annual basis, however, changes in criminal activity associated with the payment are small and estimated costs are a small portion of the total payment, according to a new analysis of the PFD by Brett Watson, Mouhcine Guettabi, and Matthew Reimer of the Institute of Social and Economic Research (ISER).

In their recently accepted article, “Universal Cash and Crime,” by the Review of Economics and Statistics, Watson, Guettabi, and Reimer use their case study of the PFD and crime to suggest that crime-related concerns of a universal cash transfer program may be unwarranted.

The study used Anchorage Police Department incident reports from 2000-2016, when the average PFD was $1,600. Substance-abuse incidents increased 14% the day after the payment and lowered to a 10% increase above average over the following four weeks. Property crime decreased 8% during that time and the percent of violent crime did not change. 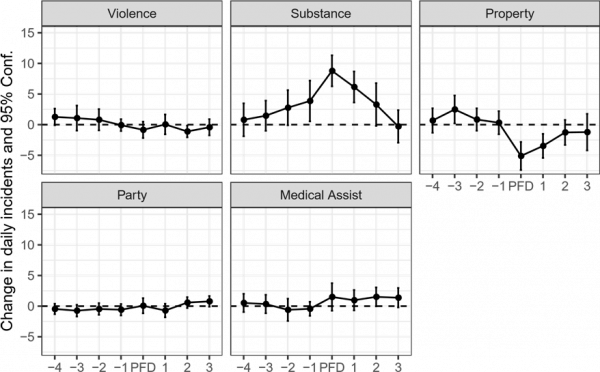 The research also suggests that there may be gains from spreading payments out over time in future universal income implementations because substance use is positively associated with higher payment distributions, but property crime is not sensitive to changes in the size of the distribution.

The Alaska Permanent Fund Dividend (PFD) is the world’s only continuous universal and unconditional income program, which is also known as a Universal Basic Income (UBI) program.  As people around the world become more and more concerned about income inequality, UBI programs are increasingly being considered. There are some that think it could replace welfare programs, according to Guettabi.

This study is unique since previous cash transfer studies – which have found increases in crime, mortality, and the consumption of drugs and alcohol – stem from conditional cash or in-kind programs associated with welfare programs.

“The PFD is a rare opportunity to learn about the behavioral effects of a Universal Basic Income program,” Guettabi said.  “We are also in the process of evaluating the effect of the PFD on childhood obesity and labor market activity. With additional financial support, there is a real opportunity to develop a nationally recognized program at ISER that informs the national debate on the merits of a UBI program.”