This article also appears on Alaskanomics.

How do oil prices influence Alaska and other energy-dependent states?

-How did we get here?

The Alaska economy is heavily dependent on the oil sector both in terms of private sector jobs and government funding. Since the rapid decline in oil prices, it has experienced a prolonged recession with declines in employment across most sectors. Before the end of 2014, oil prices were elevated for a long period of time when the price exceeded 100 dollars for multiple months. However, starting June 2014, oil prices experienced a deep drop averaging only $54.26 in the 4 years since. This is much lower than the $84.47 they averaged between 2006 and July 2014. While oil prices started declining in June of 2014, the first month of negative employment growth did not occur until October 2015. The state has essentially lost jobs in every month since that initial decline. This has also resulted in a precipitous drop in government revenues, which has forced the state to use savings to fill the fiscal gap. To gain perspective on the depth and severity of the Alaska experience, we attempt to compare the recessions across states and understand the features of the states which fared best and worst.

-Where are we now? 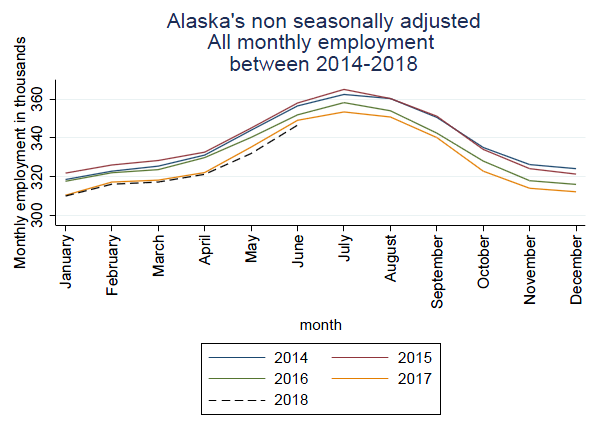 It would be a mistake to characterize the small improvements we are observing in Oil and Gas, Professional and Business services, and Construction as signs of a recovery because those sectors are still considerably smaller than they were in 2014. To be exact, as of June 2018 Oil and Gas employment was 75.5% of its level in 2014, Professional and Business services was 91.6% of what it was in 2014, and construction was 86.4% of what it was in 2014. After examining all these sectors, it appears that the Alaska economy is still weak and while the losses have slowed in the initially affected sectors (Oil and Gas, Professional and Business services, and Construction), there is still significant weakness in the retail sector. In general, it would be safe to think about the economy entering the end phase of the recession with the losses now concentrated in the household dependent sectors which are typically lower paying but are indicative of household spending behavior and general confidence. It is unlikely that we will see significant growth or a recovery of the jobs lost as the government still has a non-negligible deficit and oil prices remain too low to spur a significant improvement in hiring in Oil and Gas. These two sectors are typically the catalysts of Alaska recovery and with both of them weakened, it is best to think about the state re-entering a period of low to no growth.

-How does Alaska’s recession compare to that of other energy states?

Only six of the thirteen energy states experienced economy-wide job losses. Those states are Alaska, Louisiana, North Dakota, Oklahoma, and Wyoming, and West Virginia. West Virginia’s situation is slightly different as it had been undergoing economic decline well before this most recent recession. The figure below shows the path of decline for each of the six states. We see that North Dakota and Wyoming both experienced employment declines in 2015 while the rest were still experiencing growth. Of interest is that every state in this group experienced the most severe decline between 2015 and 2016. Also, Louisiana and Oklahoma are the only two states whose employment levels in 2018 exceed those of 2014. Wyoming seems to be on the rebound as it has had a strong first portion of 2018. The table below shows that the cumulative declines across the hardest hit five states are substantial. In terms of share of employment, Wyoming and North Dakota lead the way with Alaska being third.

How many jobs did each state lose when the recession was at its worst? [1]

[1] We only count job losses after the beginning of the recession in each of the states.

Length of the recession across oil states

Alaska’s vulnerability has stemmed from both a private and public sector dependence. The most recent decision to rely on non-oil revenues to fund a portion of the government expenditures bodes well for future economic resilience to oil shocks.

-Where does this leave us?

In general, our analysis shows that the states most dependent on oil revenues both through the private sector and government revenues are the ones to have had the longest recessions. The decision in Alaska to fund a portion of government services from non-oil revenues should partially shelter the economy from future oil price drops. All the indicator variables we evaluate point to Alaska being in the tail end of the recession but the recovery of the jobs lost will be elusive as both the oil sector and the government sector are considerably smaller than they were four years ago. The future of Alaska economic development will rest on the success of the traditional basic sectors, the pursuit of new opportunities, and on whether the state can address its leaky bucket by ensuring that more of the value generated in Alaska stays in state. That will require evaluating opportunities where import substitution is possible and ensuring there is a qualified workforce that can take advantage of employment opportunities.

We only count job losses after the beginning of the recession in each of the states.